← more from
Fresh Meat Records
Get fresh music recommendations delivered to your inbox every Friday.
We've updated our Terms of Use. You can review the changes here. 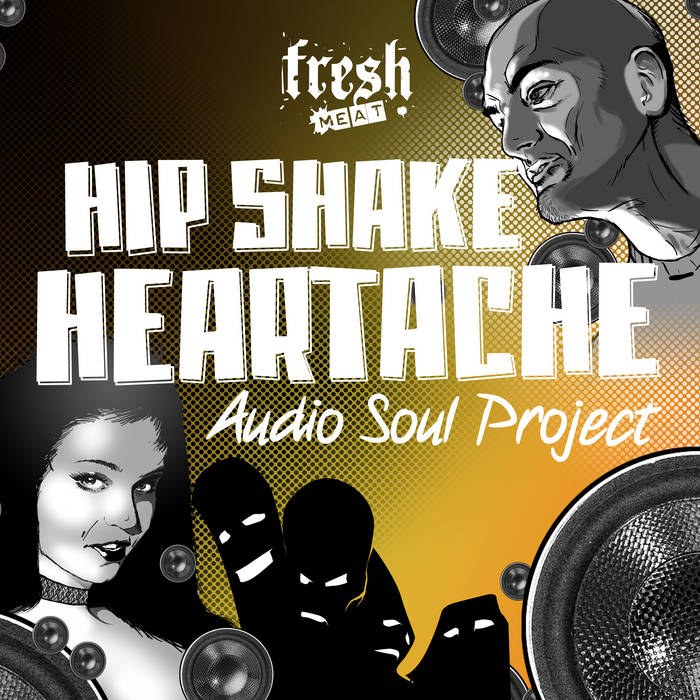 Fresh Meat Records is proud to announce the release of the second Audio Soul Project album, "Hip Shake Heartache."  With global attention quickly returning to U.S. House music, the time is perfect for one of Chicago's important working producers, Mazi Namvar, to bring his considerable talents to bear on this sophisticated album of beautiful and original music.  Following-up on the acclaimed 2001 album "Community" (NRK), Mazi wrote, recorded and produced “Hip Shake Heartache” over the course of a year, working with a cadre of vocalists including Ron Carroll, Alexander East and Nathan Drew Larsen along with seasoned musicians Jimmy Tripp and Richard Gow. This emotional and often bittersweet album is a personal story of old friends, music, treason, relationships, endings and new beginnings -- recounted and fictionalized in the graphic novelette issued contemporaneously herewith. The short story, written by Mazi, was illustrated by local artist Ernesto Perez.

Mazi is one of the most established House producers to come from Chicago and “Hip Shake Heartache” reflects his deeply rooted history. Mazi began releasing music in 1994 and has created hundreds of original songs and remixes. He DJs all over the world and has been an A&R at several respected record labels including his own Fresh Meat Records, Gourmet Recordings and the much missed Afterhours. His new multifaceted album moves elegantly between deep house, disco and more esoteric workouts - emphasizing Mazi's years of experience in the studio and showcasing his emotional song writing and production style.  He relies heavily on live performance, inventive synthesis, real machine music, creative sampling, and swingy drum programming to capture a vibe that is as dynamic as it is authentically House.

There are five vocal tracks on ”Hip Shake Heartache” including the analog filtered "Good Inside" jacking wholesale sections of music and voice from beloved inspirational compositions of the past. "My Bluff" combines the voice of talented Minneapolis native Alexander East with a tempered electric piano performance by Frenchman Richard Gow. The R&B touched "Have It All Dub" is a brooding affair undulating with subsonic bass and twisting warm synths, coated with space effects. Garage dubs like "Call of Grace" and "Never Go Away" with Carroll and Larsen on vocals, walk that fine line between ‘classic’ and ‘modern’, juxtaposing state of the art production techniques with a mainstay emotional urgency that is the root element of homegrown Chi-town House. "Mnemosyne" and "Asha" are the album’s heaters, delivering on the promise of club minded up-tempo ASP cuts. The freeform "Dig Up”, with Tripp and Gow, slows things down; a beautifully memorable deep jam session.

There is undeniable flow and emotional continuity throughout the album due in part to a conscious choice of developing the songs first as live performances with the three man ASP touring band. Plans are coming together to take the live act and the new music of “Hip Shake Heartache” on the road, transforming many of these initially live performances turned to studio recordings back into improvisational, spontaneous moments meant for a real time dancing audience.

ASP is from Chicago. He began releasing music in 1994 and has created hundreds of tracks and remixes. He has released two albums, “Community” in 2002 and “Hip Shake Heartache” in 2011, moving elegantly between deep house, disco and more psychedelic cadences. His productions rely heavily on live performance, inventive synthesis, real machine music, creative sampling, and swingy drum programming. ... more

Bandcamp Daily  your guide to the world of Bandcamp

sndtrak stops by with an Album of the Day Feature of his most recent release, FLIPS V1: Triple Lindy